Recently I met with a delightful smart and insightful ten-year-old fifth-grade girl. She spoke lovingly about spending time with her family. She was a happy child. Her mother brought her to see me because the parents thought she had dyslexia. The girl described school as difficult and reading was hard. However, when I tested her, she was able to read and comprehend 7th grade level as easily as she read a 5th grade passage. When I started asking her the questions on the 7th grade passage, she started to lose her confidence and missed three questions in a row. I told her she was reading at the 7th grade level and she answered five of the next six questions correctly. This girl told me she says “I can’t a lot.”

The parents seem to be positive. The girl is smart and capable yet she doesn’t see it in herself. As parents, we need to reinforce with our children, the “I CAN” attitude even when things get difficult.

The “I CAN” attitude is even more important for children with disabilities. I hear parents making excuses for their children. One parent told me her daughter would throw herself down the stairs if she had to return to a social group. Another parent told me her son was traumatized because a tutor raised their voice. This particular tutor is one of the kindest gentlemen I’ve ever known. These children manipulated their parents. The parents gave in to their child’s demands instead of pushing their child through the difficult situation and learning “I CAN”.

Resilience is a learned skill. Some people have more innate “I CAN” in them but children can learn from failure, difficult situations and people. Perhaps your New Year’s resolution can be to nurture your child’s ability to learn from failure. Push them when they fail, stumble or are afraid. Teach your child that mistakes are good because we learn from them. 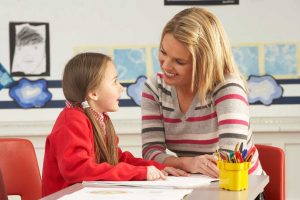 I have always enjoyed challenges. I’m not afraid to try new things … I’m not afraid of failure. My childhood wasn’t idyllic, but my parents nurtured my “I CAN” attitude. I started my first business at thirteen with my parents support. At sixteen, I was allowed to work at a resort away from home for the summer without my parents. At twenty, my parents permitted me to live in Hawaii for the summer alone. My son collected autographs and at thirteen he wanted to go to the Cleveland stadium by public transportation. I helped him learn how to do it. At eighteen, he drove to Nebraska from Cleveland alone to visit teens he had met in France the previous summer on a school trip.

Don’t rescue your child at the first sign of failure or fear. Teach them to be an “I CAN” kid. This is perhaps the best gift you can ever give your child.

Carole Richards is president of North Coast Tutoring Services, author of Richards Learning Systems and a frequent guest on radio and TV. She can be reached at caroler@northcoasted.com