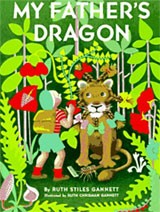 Sometimes it’s hard to find a book to read aloud to both boys and girls.  And once that book is found it doesn’t necessarily mean it will hold both of their interests.  But the book My Father’s Dragon once held a very rowdy second grade class enraptured for weeks.  My Father’s Dragon, I’ve never heard of that,’ you think to yourself.  It’s not surprising because it was written in 1948 by Ruth Stiles Gannett; despite the success of Beverly Cleary books published not long after, Stiles Gannett’s lovely book has never been labeled ‘a classic’.

The story is uniquely narrated; the protagonist refers to Elmer as “my father”, giving the delightful feeling that this great adventure has actually happened and that Elmer has told his tale time and time again to his child.  My Father’s Dragon can’t be mentioned without noting the timeless illustrations that accompany the book.  The illustrations were created by the author’s own mother, Ruth Chrisman Gannett.  Drawn with a grease crayon on grained paper, the illustrations are just as intriguing as Elmer’s journey.

It is whimsically written, a 1949 Newberry Honor Book, so the critics at least knew what they were talking about.  My Father’s Dragon is the tale of young Elmer Elevator who longs to be able to fly.  Elmer happens upon a cat that has an idea of a way to make this dream possible for Elmer.  But, the cat cautions Elmer, he would need to travel to a place called Wild Island (off the coast of Tangerina as we all know).

On Wild Island, Elmer is sure to cross the paths of irritable tigers, a weepy rhinoceros, a vain lion, and an itchy gorilla.  Should Elmer successfully bypass the animals of Wild Island and reach the riverbank, he will find a baby dragon that is being held captive by the very animals Elmer may has encounter on his journey.  The cat suggests to Elmer upon freeing the baby dragon, a flight on the dragon’s back may be offered in exchange.

To read about Elmer and his adventure on Wild Island, you can order the book at most public libraries.  It’s also available on www.smile.amazon.com.  If you would like to check it out before buying, click here. 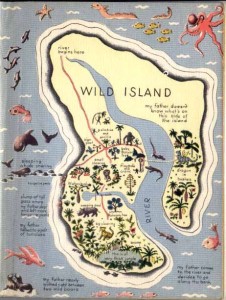